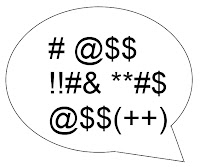 I am not a fan of the show Hell’s Kitchen but I happened to catch the final episode because one of the finalists was from Atlanta, where I live. My wife wanted to see what the final show’s outcome was which then made my choice either to go to another room or to watch, so I watched. To be honest, I was appalled. Between Gordon Ramsey, the host, and the two finalists the amount of verbage that had to be bleeped made it sound like my TV was going out. The guy that lost was incredibly bad and the woman that won used a fair amount of profanity, even though it seemed out of character for her. It was if she had taken on the persona of Ramsey and used him as the model of success. I hope she does not carry this into her new position as head chef in one of his restaurants. I think it is in poor taste, it may cause her problems in the workplace and I don’t think it is an effective way to exhibit leadership.

Let me be clear, I am no stranger to profanity. I have uttered my fair share of “curse” words in the past and will do so in the future. However, I make sure that when I do it is both situation and audience appropriate. Seldom is the workplace the appropriate place and seldom is an employee the proper target.

There are several issues associated with profanity in the workplace. These include:

There are times where it may be appropriate. It does get attention, especially if used by someone who would not normally use it. It is never appropriate in front of customers, clients or upper managment. Swearing comes down the ladder and should never go up. Research has shown that there is somewhat of a double standard when it comes to swearing. Men have an opportunity to get away with it more than women do.

According to Beverly Langford, president of LMA Communications in Atlanta, and the author of The Etiquette Edge: The Unspoken Rules for Business Success (Amazon link) “Although there are situations when profanity might be tolerated or excused, the only safe choice is to forego a curse and express your feelings, whether you are angry or elated, in another way.”

Ultimately what comes out of your mouth is a reflection of your character, so choose your language carefully and don’t use Gordon Ramsey as your model. It may work for him because it draws ratings (though I don’t know why) but I doubt it will work well for you.

1 thought on “Profanity as a Leadership Tool?”