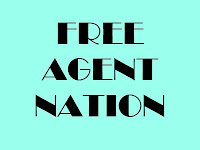 The title of the article was “Everyone is going to be self-employed.” For someone who has been that way for almost 20 years it was an instant eye-catcher. I am a big fan of ‘free agents” in the workplace so I read the article with interest. It was an interview in the October 17, 2010 issue of the Atlanta-Journal Constitution (no link available) of Jagdish Sheth, a consumer psychology expert and Emory University professor. When asked about his forecast for the future of the economy his response was :

I like the idea. I have liked the idea for a long while, ever since Fast Company and Tom Peters have been talking about Me Inc. and You, Inc. and a free-agent nation. I am not sure everyone would like to be self-employed however, but a large number might be. The roadblock that I see to this occuring is a little organization called THE FEDERAL GOVERNMENT. Both the Internal Revenue Service and the U.S. Department of Labor both have rules and regulations that make it extremely difficult for businesses to use independent contractors on a widespread basis. And in fact they are currently stepping up the efforts to make this even more difficult. (If you want to know more I have written about it several times. Put in independent contractor in the search window to the right and you will find them.) Much of this is driven by revenue. It is easier for the government to collect taxes from companies than it is to collect them from individuals. Of course they will tell you it is for the protection of the worker. But there has been public acknowledgement of the need to generate more revenue.

I asked Attorney-at-Law David Long-Daniels, of Greenberg Traurig LLP, who was presenting, at the SHRM Atlanta conference, on the pitfalls of having contingent workers and independent contractors if he thought we would ever see the Feds allow the widespread use of independent contractors. His answer was a very difinitive “NO.” And I agree with him as things exist today.

However, in the online version of Time Magazine from October 29th the following article appeared: Could the Courts Outlaw the Minimum Wage? Written by Adam Cohen, it details the political campaigns of two Republican senatorial candidates, John Raese, the Republican candidate for Senator in West Virginia and Joe Miller, the candidate in Alaska. Both of these men are saying that while the minimum wage is an ok idea it is fundamentally unconstitutional and they want the U.S. Supreme court to rule on the constitutionality of the Fair Labor Standards Act. I am not going to go into the details here because of length, you can read it by clicking the link above. But the conclusion is that would be a major uphill battle to over turn the FLSA.

But the idea has started. And it could gain steam if the forecast of Dr. Sheth starts to materialize. If more people want to be free agents and more companies want to use free agents there may be a drive to unregulate those relationships. And overturning the FLSA would certainly do that. I sincerely doubt that will happen but the move may cause more people to reexamine how we work in this country. Dr. Sheth had an interesting conclusion to his interview that may add some fuel to the movement. He said:

“America is has a survival instinct, and we foster entrepreneurship. It is a nation of ideas, and entrepreneurshisp is the best form of egalitarianism- better than democracy. Entrepreneurship does not discriminate by religion, gender, ethnic backgroun. To me that is the most powerful.”

So there is some thought for you to chew on. What do you think? Do we have a chance to become a nation of Free Agents? Will entrepreneurship win over government?

13 thoughts on “Free Agent Workers: "Everyone is going to be self-employed"”