A newsletter I received today from the law firm of Ogletree, Deakins, Nash, Smoak & Stewart, P.C., was entitled NLRB Issues Numerous Controversial Anti-Business Decisions. The newsletter detailed a number of decisions that the current board has quickly made. According to the authors “In one day, August 27, the current NLRB majority, consisting of Chairman Wilma Liebman and Board Members Mark Pearce and Craig Becker, issued over 30 major decisions…”

The newsletter further states “…there are many that, under questionable and closely contested facts, expand interpretations of ‘protected concerted activity.’ The result is a clear pattern where the Board exercises increased scrutiny of employer conduct when a union loses a representation election.”

One of the reasons they are rushing through these decisions is that Craig Becker, former Chief Counsel for the SEIU, is a recess appointment. You can read more on him here An Union Update: Craig Becker and the NLRB. But what that means is that they are rushing through as many decisions as possible before his term is up at the end of the year. They know he will not be in that position come January, and will have not chance of getting reappointed, since he could not get confirmed by the Senate this year. With the changes likely to happen in the mid-term election his chances will become “slim to none” with the emphasis on the “none.”

So in the meantime they are cranking out as many “union friendly” decisions as possible. Well here, let me make it easy and offer them this form they can use. 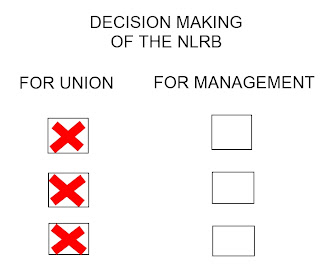 This will make their job just a bit easier.