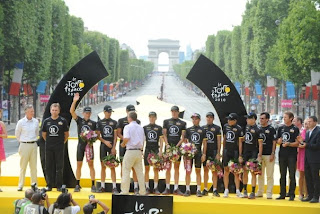 If you follow sports at all or even just glance at the news you probably know that the Tour de France is overwith as of yesterday July 25th. You may have picked up that Alberto Contador won his third Tour. In the news this race was as much about Lance Armstrong’s FAILURE TO REPEAT as it was about Contador’s win (battling Andy Schleck). Much was made of Armstrong’s crashes and flats and his “old” legs. He only finished 23rd, out of 170 riders, thus “failing” at his comeback and a ride to glory.

But he didn’t! He rode everyday. He pushed when he was needed and he supported as needed. He did improve his personal standing but MORE IMPORTANTLY he stayed in a leadership position to allow his TEAM to compete for the championship. And compete they did. The Radioshack team, managed by Johann Bruneel and lead by Lance Armstrong finished as the number one team in the Tour de France.

As a leader Armstrong set aside his personal travails and made sure the team prospered. He set an example that the younger riders learned from and provided an example to all of us of leadership. As a result his team prospered, his team was rewarded (reputation-wise and financially) and he ended his last Tour de France in a manner befitting a champion.

Lesson learned: Leadership is not about personal glory, it is about the success of those you lead.

Photo credit: borrowed from Versus.com without permission but asking for foregivenss