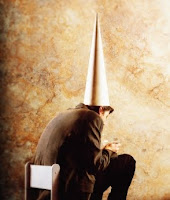 I was thumbing through my copy of The Daily Drucker

this morning. I always read the wisdom for the day, but then I read some other entries that I might have missed. One such entry is the one that appeared on June 7th. It dealt with the topic of “sudden incompetence.” Drucker asks the question “Why should people who, for ten or fifteen years, have been competent suddenly become incompetent?” This is a question that managers and HR alike often puzzle over when dealing with people who have been promoted. He answers the question with “The reason in practically all cases I have seen, is that people continue in their new assignmentto do what made them successful in the old assignment and what earned them the promotion. They then turn incompetent, not because they have become incompetent, but because they are doing the wrong things.” Basically we have not positioned people to be successful by not making clear to them the things that are crucial to the new challenge, the new job, or the new task.

This concept, however, has a more global meaning to the field of human resources. There are an ever increasing number of calls for  radical change in the field of HR. (See my interview with Kris Dunn on June 23rd and read his answers.) There are many people who feel that many HR departments and HR professionals have reached their level of sudden incompetence. Are you included among these described this way? Are you doing the same things in the past that were successful and got you accolades, but now are the reasons you are failing? If you are then you NEED TO CHANGE. Albert Einstein once said “The definition of insanity is doing the same thing over and over again and expecting different results”.

Today in HR there is a new challenge and a new job. It requires a differenct way of thinking. (Talent vs. headcount) It reqires new tools (Social media vs. Intranet). It requires new tasks (flexibility vs. rules). Things in the past need to be abandoned and new ways need to be embraced. If you don’t do this then Albert’s definition will apply to you and according to Drucker you will be deemed a “sudden incompetent.”

What are the top FIVE things you are doing to stave off sudden incompetence? What can others learn from you?

1 thought on “A Lesson From Drucker: Sudden Incompetence- A Danger for HR”