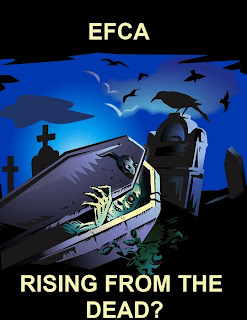 Much of the talk over the past year about the Employee Free Choice Act (EFCA) dealt with the fact that not much was going to happen with it until HealthCare had cleared or died. Well as we all know, the Senate Healthcare Bill passed the House of Representatives on March 21 and will be signed into law by President Obama on March 23. So what now for EFCA?

Will EFCA now rise from the dead? If it does the version that will be worked on will be that of Senator Arlen Specter (pun not intended by happily pointed out.) An article in the September 17, 2009 issue of the Washington DC Employment Law Update blog dealt with Specter’s “Compromise” version of EFCA. It pointed out that Specter’s compromise gets rid “Card check” aspects of bill. However, quoting a Washington Post article, writer blogger Jay Sumner stated “…the amended EFCA would try to make union elections more fair by sharply limiting the time between organizers’ declaration that they have enough support to call an election and the day of the vote, to reduce the potential for employer intimidation. Organizers would also be guaranteed access to workers if employers held mandatory anti-union meetings on company time. And the penalties for employers who break labor law rules would be triple what they are today.”  (The emphasis is mine and points out a bad precedent. Unions have all the access they need to have after work. A time that the employer does not. Unions have the right to visit in the homes of workers, employers do not.)

The second part, and more dangerous part of the bill, gets altered as well. Sumner points out “As for the equally contentious arbitration provision, the amended bill would still impose forced government arbitration if the parties cannot agree to the terms of a first contract within a specified time period, but would establish a “last best offer” model for final resolution. Under this approach, the arbitrator chooses between the two parties’ contract proposals, rather than exercising unfettered discretion on contract terms.”
Sumner summarizes by stating “While on the surface these amendments appear to temper some of the more controversial terms that have been anathema to business interests, the changes are not drastic enough to attract wide-spread support within the business community, most of which is opposed to EFCA in any form and in particular is opposed to first contract arbitration. In fact, this version of EFCA – unlike the original bill – would provide union organizers with unprecedented access to the workplace. While the suggested bill would preserve the representation election process, the shortened election period would limit an employer’s ability to present its position to employees so that employees can make a fully-educated decision on unionization having heard both sides.” (The emphasis is mine).

This compromise is bad news. By stripping the “card check” from the bill and preserving “secret ballot elections” much of the uninformed will think that the bill is palatable. IT IS NOT!

So lets not let down our guard! Pay attention to what is going on. I am sure unions are chomping at the bit to get this pushed through. And as the Healthcare bill showed DEAD AND BURIED may only be a perception and EFCA may yet rise from the dead and walk ZOMBIE like to reality.

1 thought on “EFCA After Healthcare: Rising From the Dead?”