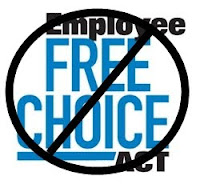 With all the talk about Healthcare one would think that no other legislative activity is going on in Washington. Alas, we could not be so lucky. There is still plenty of activity going on. So here is an update on various activities that are taking place.

Regardless if you are currently dealing with unions or not you need to read this stuff. With changes at the Department of Labor, the NLRB, and in legislation  you may at some point soon be dealing with union activity. And the more preparation and information you have the better off you will be.

1 thought on “Update of Union Activity”