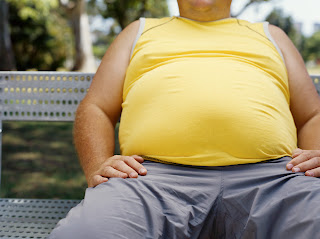 I know that is not really a word, but it could be, and is abrupt enough to make my point. Despite the fact that 65% of adult Americans are overweight or obese, (See A Nation at Risk: Obesity in the United States), we have a culture that celebrates thin. In fact I would go beyond celebrate to say worship. Overweight people are often labeled as lazy, having no self-control, no will power, no drive. And to an extent, for some people this is true. I know it is in my case. I weigh more than I should. I wax and wane on exercise and on eating properly. I have been up and down in weight. I know I can weigh less and be healthier, because I have been. I am back on that road right now with regular exercise and watching what I eat. But it is not always an issue of just self-contol for some people. It is not always that easy.

Unlike racism, sexism and ageism however, there are very few laws that protect people from weight discrimination in the workplace. No explicit federal law exists and only a few local or state laws exist. However, the area of weight discrimination is beginning to present some challenges to human resources departments. With the changes in the ADA late last year, where disability has been redefined, overweight individuals who feel they have been the victims now have the potential for claiming protection under ADA. Up to this time only morbid obesity could be claimed to be disabiling, but now people may be able to claim protection because of the physical problems that arise from too much weight, such as diabetes and heart disease.

Additionally, numbers have shown that some minorities have higher incidence of obesity, thus claims may be made under Title VII and disparte impact. Sex may also play a factor, since overweight women suffer a higher rate of discrimination than do men, allowing a claim of sex discrimination based upon decisions made on weight. And lastly, age and weight may be a factor, since older workers also have a higher incidence of “overweightness.”

So making decisions based upon weight is becoming much more problematic for companies and I predict there will be an increasing number of law suits that will provide some defintion to this arena.

Your best protection to keep from becoming a landmark case? Make your decisions based upon qualifications and productivity. If you keep it work related you will stay out of trouble far more often than not. And all good HR people already know this. Don’t you??


BTW, if your reaction to the picture was disgust, well then read this article again and then look in the mirror.