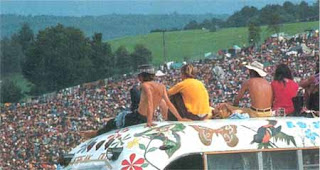 Just to get this out of the way… I am not a sociologist or a social anthropologist. So the statement I am about to make is pretty much my impression of social trends. Today, U.S. baby boomers, who are the most frequent complainers/targets of ageism, are suffering the results of their own making. Prior to that generation there was more respect for older workers, more respect for parents, more respect for the wisdom of experience that came with age. Of course there has always been displacement of the old, that is a course of nature. Young male lions drive off the older male pride leader. Younger stallions drive off older stallions. But I think the Baby Boomers were a different case with a more widespread disdain for all things “old.” BTW, “OLD” was delineated by the age of 30. We spawned the Love Generation, Hippies, Painted Micro buses, free love, heavy drug use, Vietnam protests and more. All things that flew in the face of older generations and our parents in particular.

Wikipedia says about the Baby Boom generation “One of the unique features of Boomers was that they tended to think of themselves as a special generation, very different from those that had come before. In the 1960s, as the relatively large numbers of young people became teenagers and young adults, they, and those around them, created a very specific rhetoric around their cohort, and the change they were bringing about. This rhetoric had an important impact in the self perceptions of the boomers, as well as their tendency to define the world in terms of generations, which was a relatively new phenomenon.” It goes on to further say “Boomers grew up at a time of dramatic social change. In the United States, that social change marked the generation with a strong cultural cleavage, between the proponents of social change and the more conservative.” Additionally, “In general, baby boomers are associated with a rejection or redefinition of traditional values…. As a group, they were the healthiest, and wealthiest generation to that time, and amongst the first to grow up genuinely expecting the world to improve with time.”

Now successive generations have picked up our distain of all things “old” and unfortunately we are now the object of that disdain. Rather than accepting our age we fight it with statements like “50 is the new 30” and book titles like Younger Next Year. So even though we (and I am one) dislike ageism, we continue to dislike all things old.

So we aging baby boomers are struggling with conflicted emotions. We dislike being “old” but still feel valuable and we turn to laws to provide us protection in the workplace in order to try to stay employed.

Next post will be about the laws that protect older workers and what HR departments need to be aware of. Stay tuned.

1 thought on “AgeISM Part 2: The Roots of the Bias”