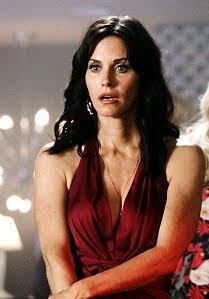 Did you know that Courtney Cox has been covered by the ADEA for 5 years now? It is hard to imagine her being the object of AGEISM. But she could be, and in fact she will be starring in a new role in the fall, were she plays a 40 year old woman re-entering the dating scene, in Cougar Town.
According to the dictionary ageism is defined as “Discrimination based on age, especially prejudice against the elderly.”  And in the United States that is generally the way it is thought of, in fact there is a federal law that bans discrimination against anyone over the age of 40. (I remember that birthday. I did feel old then, if only I knew!) But ageism is actually a bit more complicated than that. Younger people are also discriminated against in many instances, generally under the guise of lack of experience. Both types of discrimination have consequences, but discrimination against older workers has some very real legal consequences for employers. Discrimination against younger workers has few legal consequences for companies.

Over at Punk Rock HR my fellow blogger, Laurie Ruettimann, had this observation in her post entitled Ageism, Sexism & Whatnot  “…no one cares about ageism until they’re old.” And she is correct! At least on a personal level. HR departments and management teams need to care about it everyday.

So this week I am going to explore agesim in a bit more detail:

In the meantime you can read something I wrote earlier this year after I witnessed some “ageism.”
Ageism in the Workplace

I also want you to raise your awareness of ageism. Listen to what people say, especially in your workplace. Watch how people act. Look at commercials. I bet each of you will find at least 5 examples of ageism. And if you are an older job hunter you can probably cite many examples of personal situations.

So while I am writing this week give me some examples! How have you witnessed discrimination, be it because you are young or old?

Photo: From a promotion for the show Cougar Town