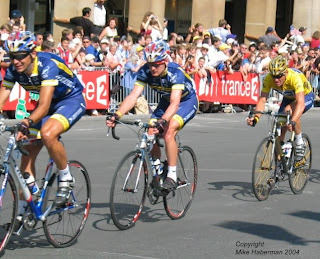 I am a big fan of cycling, the Tour de France and Lance Armstrong. I have had the opportunity to see one race in person (2004 when Armstrong won his record breaking 6th TdF). So I definitely watched with interest as he made a comeback this year in a bid to win an eighth title. There were all kinds of questions about Armstrong, his team and his bid. They had the strongest team, that was a given, but there was potential conflict amongst the team members. There were three potential leaders, Armstrong, Levi Leipheimer and Alberto Contador. Armstrong and Contador were previous winners and the third (Levi) had finished 3rd in 2007. Experience was in Armstrong’s favor, but he had been absent from cycling for over 3 years, he was recovering from a broken collar bone and of course he was approaching the “old” age of 38 years. He had more to lose than he did to win.
From the start there was dissension in the leadership. Who was going to be the leader? Johann Bruyneel, the coach and director of the team, stated that “leadership” of the team was going to be sorted out on the road. The best rider was going to be supported by the others. Early on Contador tried to establish himself in that position. He violated the team plan and make a breakaway in one of the early mountain stages. He showed that he was very good in the mountains and established himself as the team “leader.” Or more correctly the “rider to support for win.” In my opinion he did not establish himself as a leader. Contador made it apparent from the beginning he was there for himself by both his statements and his actions.
Despite the fact that only one person rides a bicycle in this sport it is very much a team sport. No one rider can make it without the support of the team. And this is where Armstrong showed his leadership. Rather than making a big show and trying to be competitive with Contador he put aside his personal ambitions and supported his team and his team “leader.” He conducted the race from the peloton (see here for the Wikipedia explanation) and made sure Contador stayed in position to win the race. He was careful in the interviews not to make an issue of the tension on the team or the fact that Contador did not follow the rules. And Armstrong was interviewed alot. He realized that it was best for the team. And this was very tough for the VERY competitive Texan. But his maturity and leadership paid off. Contador was the champion, the team was the best team and, by the way, Lance was able to still make the podium in 3rd place. Not bad for a personal comeback and very lucrative for the team. Contador’s win, Lance’s 3rd place and the team’s placement garnered over $900,000 in prize money alone.
The lessons on leadership for us in this sporting example are:

Lance Armstrong’s comeback showed that you can lead from the back.

Photo Credit: This is my photo taken in Paris in July of 2004 on the Rue de Rivoli.