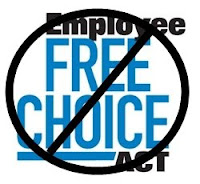 According to an article in the LA Times (SEIU borrows business’ anti-union tactics to fend off a rival) the SEIU, the Service Employees International Union, is rejecting exactly what they are supporting in the Employee Free Choice Act. The article states “…the union is urging federal officials to throw out petitions signed by tens of thousands of its own members who have asked to be represented by a rival upstart group.” The article goes on to say ” In lodging legal challenges to the roughly 80 petitions filed by its fledgling competitor, the SEIU has moved to block organizing elections at hospitals, clinics and nursing homes up and down the state. And it has used some of the same tactics that employers often use to thwart union drives.”

Amazingly the SEIU, as the article states “One of the giant union’s allegations echoes a key argument that corporate interests make against the proposed law, the Employee Free Choice Act: that labor activists can intimidate or mislead workers during organizing campaigns.” Talk about being two-faced! The SEIU has turned to the NLRB and has charged the rival union with unfair labor practices (ULPs) and wants the petitions set aside. Yet Andy Stern, president of the SEIU, says this does not change his stance on EFCA. Sure, not as long as it will work for his benefit. But let it work against him and he is for using current labor law. Sounds like a good argument for not needing EFCA in the first place.

Read the article (link above) to get the full story, especially if you think EFCA is a good thing. This may help you decide otherwise.
A side note: Al Franken will be made the newest Senator next week. This will give the Democrats a philibuster proof majority. This is going to make it much more likely that the EFCA will be passed along with all the other pending legislation mentioned in yesterday’s post. Read them and weep.