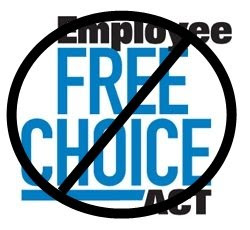 I know alot of people are tired of the discussions on the Employee Free Choice Act. Laurie Ruettimann of Punk Rock Human Resources is a leader in this respect with her blog post of EFCA: I’m Bored. She says this is a tired discussion and that labor and management both missed an opportunity to come up with a new way of conducting labor relations.

Arlen Spector, the Republican Senator from Pennsylvania and a key vote on EFCA, has publicly announced he will not support the bill, thus eliminating the possibility of a vote of cloture. (Cloture means closure. Here is an explanation of it from the Senate.) In his remarks Specter also suggested that the National Labor Relations Act needed an overall. Michael Moore, at the Pennsylvania Labor & Employment Blog, gives a detailed explanation of Specter’s remarks. My reading of this overall actually sounds still too biased in favor of unions and is not much more than another way of institutionalizing EFCA.

I am in agreement with both Ruettimann and Specter. It is time to look at modernizing and revising labor laws passed in the 1930’s and 1940’s. The world is a much different place now with a much different workforce. However, in order to do that both sides of the table must be interested and UNIONS are not interested in doing that. They see this time and this administration as an opportunity to regain power, using old methods and old tactics that perpetuate old union points of view. Why negotiate a new way of doing things if you think the deck is stacked in your favor? (explanation of that idiom)