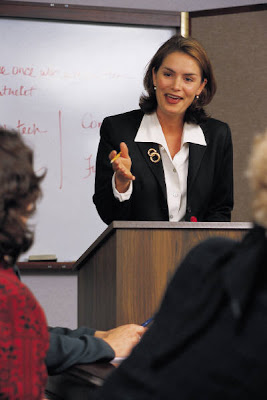 How many times have you been suprised by someone who “looks” like they should have a great speaking voice yet ends up having a voice that is unpleasant to the ear in one way or another? Perhaps they have a high pitched or squeeky voice, or too much of an accent or regionality in their voice. I know I have been disappointed a number of times. I expect a leader to “sound” like a leader and a president to “sound” presidential. I think the sound of McCain versus the sound of Obama made a difference in the past election. Some of you may suffer from the same malady. You may not have crediblity in your position because you don’t “sound” credible.
Well did you know you can do something about that? It happens all the time. Actors have voice coaches and it works (with the exception of Kevin Costner in Robin Hood.) Hugh Laurie, the actor who portrays Dr. House, has a heavy English accent when he is himself, but he sounds 100% American when in character. Business people have discovered that having a voice coach can improve their opportunities in the workplace.
According to an article in the DallasNews.com more and more business people are using voice and speech coaches. The article, Voice Coaches’ Work Strikes a Chord, states that “A great voice makes you sound more interesting, more intelligent and more trustworthy. It helps you get ahead.” The article further states that “The Voice and Speech Trainers Association, meanwhile, estimates that a third of its members now work with the general public rather than sticking with actors and voiceover artists.”
The training is not inexpensive at about a $100 per lesson for a minimum of 6 lessons and lots of practice. But if you feel your career is being held back it might be worth it.
And for you jobseekers, who make a recruiter cringe everytime you open your mouth, it might be worthwhile to stand out from the crowd. A great voice will not get you a job by itself (unless you are doing voice over), but it will make you noticeable and memorable. If nothing more it may help you feel better about yourself. As one person said “That gives me a level of confidence I never had before – which may be the biggest benefit.”
Check it out.