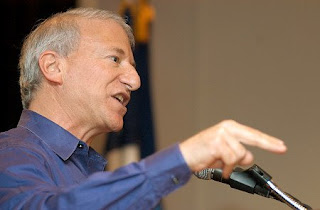 Andy Sterns is the president of the SEIU, Service Employees International Union, an AFL-CIO breakaway and the fast growing union organization in the United States. He is also one of the biggest threats to American businesses. In an interview in the Wall Street Journal in December called Let’s ‘Share the Wealth’ : America’s most powerful union boss says Europe offers a good economic model Sterns makes it no secret that he feels unions got Obama elected and he intends to hold Obama’s feet to the fire. “Mr. Stern sets this simple bar for the Obama presidency: “I expect nothing less than what he said he was going to do, and we should hold him accountable.”
And Stern seems to have Obama’s ear. Stern recommended Rep. Hilda Solis as a nominee for Labor Secretary (see yesterday’s blog post) and was on the inauguration stand right beside the new President as he was sworn in. Stern is obviously a big proponent of the Employee Free Choice Act. So he will be bringing a great deal of pressure to bear on Congress and the Obama administration to get it passed. After all $450 million buys alot of favors.
Stern is not your stereotypical leader. He is highly educated and articulate. He has never held a blue collar job and had been trained in union tactics by a reputed socialist organization. He has been able to team with WalMart, a hated enemy, to argue for universal healthcare (see my post from Feb. 08, 2007 called Strange Bedfellows.)
However, he is not without his warts. There are union members in California who feel that he has run roughshod over their rights and many union leaders are unhappy with his strong-arm tactics against unions he wants possession of. See SEIU President Andy Stern is a threat to labor soul published at NYDailynews.com.
So do not take this man lightly. He is out to get business. And other unions. And, by the way, politicians if they do not do what he wants. The WSJ had this fact and quote. “The bit about accountability is no idle warning. Organized labor put up some $450 million to get Democrats elected. The SEIU accounted for $85 million of that, making Mr. Stern’s union the single biggest contributor to either party in this election cycle. And just in case, the SEIU set aside an additional $10 million fund to get people unelected if need be. “We would like to make sure people appreciate that we take them at their word and when they don’t live up to their word there should be consequences,” he says.”