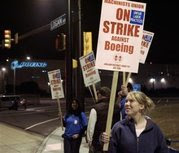 One of the things I love about the the good ol’ US of A is that, as a whole, we are a generous people. Individually we give ALOT of money to charities that help people across the nation and across the world. And of course the government is very generous with our money, helping countless causes around the world, supplying disaster relief, providing money to governments and charities to make up for the shortfall. This is something the US should be proud of doing. So it goes to figure that when our own country starts to suffer some we pitch in. We send money to areas hit by hurricanes. The government, with our money, bails out the banks. Which is ok, it will be good in the long run. We conserve fuel and start taking public transportation. So everyone pitches in to help make keep the economy whole and get things turned around. Right?
Well wait a minute. Not everyone! How can this be you ask? Aren’t we all patriots? Apparently not the 27,000 Boeing machinists, who have gone out on strike. This is a strike which will cost the company $100 million a day according to a Reuter’s news story. Additionally it has already had a global impact, depressing some stocks and raising the value of Airbus. In Seattle the local economy will be hit hard, given that is where the machinists are located. The machinists are even angry at their own union for trying to delay the strike in order to reach agreement with Boeing. So they have gone on strike and the effect is being felt worldwide.
The issue is apparently not money (hmmm, really?), it is about subcontracting and outsourcing. It is that Global Economy thing. Well, we will see how this turns out. Here is an Associated Press story which has a more complete detailing of the issues and demands.
You will note that the major issue in this article is money. They wanted more than the 11% increase that was offered. (I think most of us would be pretty happy with an 11% increase.)Given that the average wage for machinists is $56,000 a year before overtime and benefits that raise would have been $6000+. If my calculator is correct that is $162,000,000 in additional wages. It is no wonder Boeing has to outsource or subcontract work.
Anyway, read the articles. You decide if the machinists are helping or hurting our tough economy. USA, USA, USA
(Photo credit: Robert Sorbo/Reuter)

1 thought on “Pitching In When Times Are Tough: OOPS!”