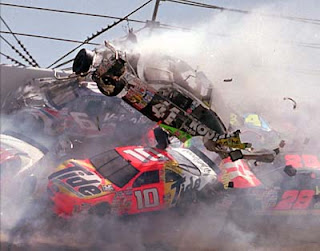 The headline screams Former official sues NASCAR over harassment claims. Is anyone in HR surprised by this? A black woman official suffers multiple incidents of both racial and sexual harassment. She complains and then is fired. So now there is retaliation as well. This is going to cost NASCAR big time!
But no one, especially HR folks should be surprised this occurred. The history of sexual harassment is rife with example after example of women taking on roles in traditionally male oriented fields or jobs and being subjected to countless acts of hostile environment harassment. And the history of racial harassment has been the same way, only there it was both disparate treatment and disparte impact.
Given this history, that is over 30 years long, you would think that when NASCAR, a bastion of white males, has a black female (or female of any race) join the fold they would be prepared for situations. You would think HR would be sensitive and would not only head off situations but would certainly respond quickly and vigorously to any complaint. But apparently not because the HR manager is named in the lawsuit. Shame on them. They should never work in HR again!
The lesson to the rest of us, if you have not learned it before now, is that when you are going to mix races and sexes in areas where they are not traditionally mixed you had better be prepared for trouble. Training, response time, investigation, discipline all need to be planned for and instituted as quickly as possible. If you don’t you will probably get what you deserve. In my opinion NASCAR is going to take a big hit, one that it definately deserves.

1 thought on “NASCAR Sued For Harassment: What a Wreck for HR”