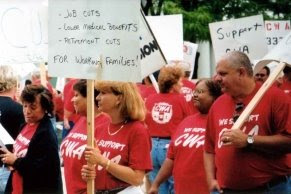 According to an article in Kiplinger’s online newsletter organized is preparing to spend enormous amounts of money on the presidental, congressional and other campaigns this election year. According to the article “Organized labor will empty its huge war chest in the coming months in a bid to elect pro-worker candidates to the White House, Congress and state and local offices. The AFL-CIO has approved a record political budget of $53 million, and the Service Employees International Union (SEIU) has budgeted $70 million.” They will be spending twice the amount that business is spending in an effort to get as many Democrats elected as possible. And they are coordinating the efforts to avoid redundancy in the campaign.
The reason they are doing this is that a Democrat controlled White House, Congress and State Houses will be much more friendly to union favorable legislation. This is important to them as they try to regain their strength from a long period of losing membership.
One area they are in particular trying to be influential is in the passage of the Employee Free Choice Act. The article states “The top legislative priority for unions next year is to pass the Employee Free Choice Act, which would require employers to recognize a union after a majority of workers sign pro-union cards. Union organizers stress that putting a Democrat in the White House and increasing the clout of Democrats on Capitol Hill would vastly improve the bill’s chances. Passage of the bill would greatly boost unions’ organizing efforts, helping to replenish their ranks.” Additionally, “Other legislation on labor’s agenda includes paid family leave and a reworking of job definitions to make more positions eligible for union membership.”
Please pay attention to the two highlighted areas above. The so-called Employee Free Choice Act is anything but. It takes AWAY an employee’s ability to choose, in an intimidation free setting, whether or not they wish to be represented by a union after they have had an opportunity to hear the pros and cons of union representation. EFCA allows for a union to get employees to sign cards, often in an intimidating setting, and then forcing the employer to recognize and negotiate with the union without a secret ballot election ever being held. This law is not about employee choice! It is about the second highlighted area. It is about unions making things easier for them to replenish their depleting ranks!
If it passes, due to a Democrat controlled administration, it will be bad news for employers and business in general. So pay attention to the election, pay attention to union activity, pay attention to what employees are saying.